LCBO’s focus on excellence in the customer experience, expense management and operational efficiency has contributed to another record year. LCBO’s financial results for fiscal 2015-16 show net sales growth of 6.8 per cent, at $5.57 billion. The provincial agency transferred a dividend of $1.935 billion to the Ontario government (excluding HST), $130 million more than the year before.  Net income for 2015-16 was $1.97 billion, an increase of 8.2 per cent. The Office of the Auditor General of Ontario has yet to review these figures.

It was LCBO’s 21st straight year of record sales and 22nd consecutive dividend increase to the Ontario government. The annual LCBO dividend pays for provincial government priorities such as health care, education, infrastructure and other important public services.

Net sales of Ontario wine through LCBO wines category and Vintages in 2015-16 were $456 million, an increase of 8 per cent. Ontario craft distillers continue to see strong sales growth, up 63.7 per cent to $3.7 million. Sales of local craft beer were $69 million, up more than 35 per cent over the previous year.  Locally produced craft cider had an increase of 54 per cent to $5.1 million.

In fiscal 2015–16, the LCBO also expanded its wholesale channel, as it became the wholesale supplier of beer in grocery stores. This was part of the recommendations from the Premier’s Advisory Council on Government Assets. In the 2015 Ontario Budget, the Province announced it would proceed with this recommendation. Sales of beer to grocery stores during a four-month period starting in December 2015, totaled $7.9 million. Later this year, LCBO will also be the wholesale supplier for both cider and wine in grocery stores.

For the first time, net sales at LCBO’s Queens Quay store in Toronto surpassed the $50 million mark. The final number came in at $51.5 million. LCBO’s top-selling stores also include the flagship Summerhill store in Toronto ($47.2 million), and the Rideau St. and King Edward Ave. store in Ottawa ($30.4 million).

LCBO ensures beverage alcohol is sold in a responsible manner throughout Ontario. The commitment and vigilance of our frontline staff in protecting the people of Ontario is reflected in the Challenge & Refusal statistics. In fiscal 2015-16, LCBO retail staff challenged more than 14.5 million people who appeared underage, intoxicated or were suspected of purchasing for an underage or intoxicated person. Nearly 346,000 individuals were refused service; 85 per cent for reasons of age.

LCBO’s Integrity Shop Program, which is conducted by a third-party, verifies our retail employees’ compliance with our Check 25 policy, which requires staff to check ID for anyone who appears to be under the age of 25. Last year’s overall score was 90 per cent. Similarly, LCBO retail stores are mystery shopped for customer engagement and last year’s average score was 87.5 per cent.

LCBO is committed to making a positive difference to the people and communities we serve. Customer donations at LCBO checkouts and employee fundraising efforts raised $10.9 million for worthy causes in 2015, an increase of 14.7 per cent over the previous year. Charitable organizations that benefit include the United Way, MADD Canada and Ontario’s four children’s hospitals, along with numerous other provincial and local charities.

“This year’s strong results allowed the LCBO to deliver another record dividend to the Ontario government in the amount of $1.935 billion. Fiscal 2015-16’s record numbers are the result of a continued focus on helpful and knowledgeable customer experiences, expense management and positive market conditions, “ said LCBO President & CEO George Soleas. “In the year ahead, LCBO will face a more competitive landscape, but by continuing to invest in training our frontline staff as product knowledge experts, innovations like e-commerce, and upgrading and expanding our store network, LCBO is well-positioned to deliver an excellent shopping experience and financial dividends for the people of Ontario.” 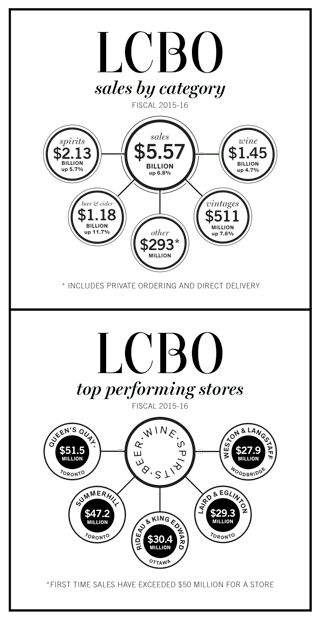 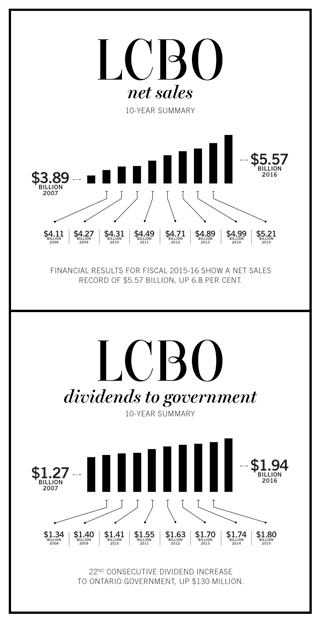 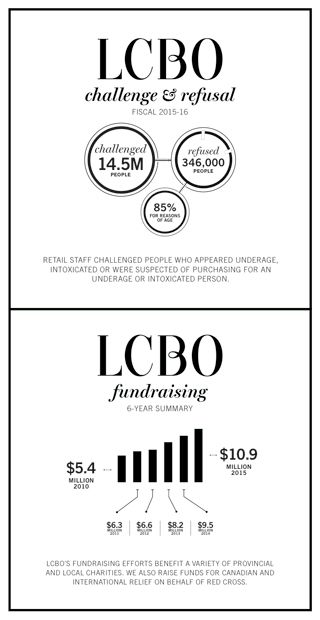