Of the $8.2 million total, $7.7 million was raised in LCBO stores through customer donations. LCBO’s Western Region, which includes Windsor, London, Kitchener, Niagara Falls and Hamilton areas, contributed more than $1.66 million to the total.

“We are so grateful for the incredible support of LCBO, its employees and especially its customers who continue to make Giving Back In Our Community a priority,” says Susan Crowley, President & CEO of Children’s Health Foundation. “Funds raised for Children’s Hospital at London Health Sciences Centre will provide specialized equipment to help give tiny newborns from across Southwestern Ontario the best possible start in life.”

“We are extremely grateful for the tremendous generosity and loyal support of LCBO customers and employees who raised a record $350,524 this past December,” says Pearl Veenema, President & CEO of Hamilton Health Sciences Foundation. “The funds raised for McMaster Children’s Hospital help ensure our health care professionals have the equipment and other resources they need to provide extraordinary care to thousands of children and their families.  A portion of the funds will also support a new Teenage Alcohol Use Awareness Campaign.”

“The $8.2 million raised for worthy causes in 2013 is a testament to the generosity and community spirit of our customers and employees,” says Michael O’Reilly, LCBO Western Regional Director. “It shows that when we work together, we can make a meaningful difference in the lives of individuals and communities across the province.” 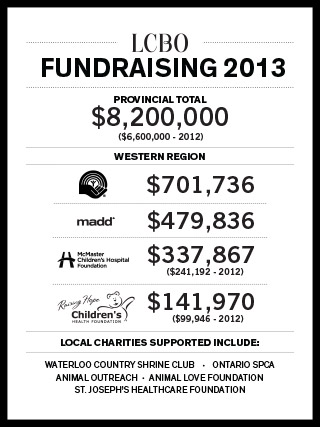 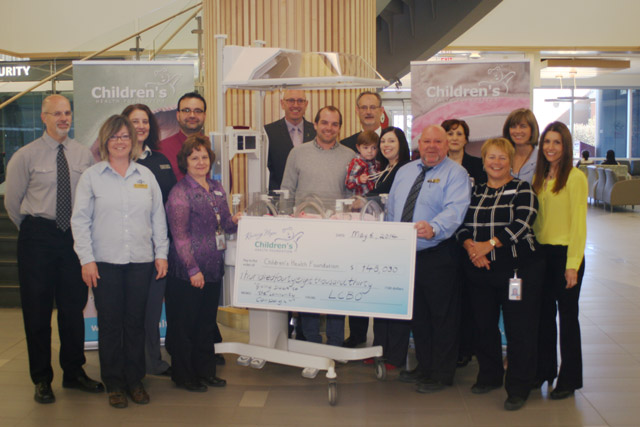 LCBO representatives celebrate the generosity of customers and staff who raised over $148,000 for Children’s Health Foundation as part of the 2013 Giving Back In Our Community campaign. These funds will enable Children’s Hospital, London Health Sciences to purchase two specialized beds (pictured) for premature babies.