“We would like to thank the LCBO, its employees and especially its customers for donating a new record of $1.2 million to SickKids Foundation,” says Ted Garrard, President & CEO of SickKids Foundation. “These funds will support research in the area of fetal alcohol spectrum disorder (FASD), along with the development of a substance abuse program for teens, and AboutKidsHealth, a health portal for kids and their families.”

“The $8.2 million raised for worthy causes in 2013 is a testament to the generosity and community spirit of our customers and employees,” says Rick Redwood, LCBO Northern Regional Director. “It shows that when we work together, we can make a meaningful difference in the lives of individuals and communities across the province.” 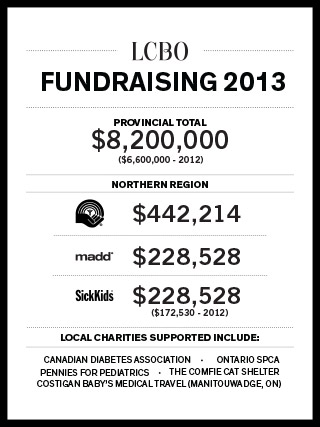 LCBO representatives celebrate the generosity of customers and staff who raised a record $1.2 million for SickKids Foundation, including President & CEO Ted Garrard (centre left), as part of the 2013 Giving Back In Our Community campaign.