Of the $8.2 million total, $7.7 million was raised in LCBO stores through customer donations. LCBO’s Central Region, which includes Mississauga, GTA, Toronto and York areas, contributed more than $2.76 million to the total.

“We would like to thank the LCBO, its employees and especially its customers for donating a new record of $1.2 million to SickKids Foundation,” says Ted Garrard, President & CEO of SickKids Foundation. “These funds will support research in the area of fetal alcohol spectrum disorder (FASD), along with the development of a substance abuse program for teens, and AboutKidsHealth, a health portal for kids and their families.”

“The $8.2 million raised for worthy causes in 2013 is a testament to the generosity and community spirit of our customers and employees,” says Rafik Louli, LCBO Central Regional Director. “It shows that when we work together, we can make a meaningful difference in the lives of individuals and communities across the province.” 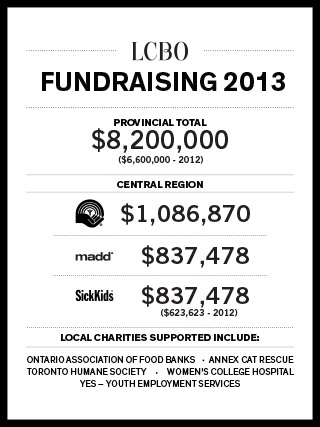 LCBO representatives, including Central Region Director Rafik Louli (centre right), celebrate the generosity of customers and staff who raised a record $1.2 million for SickKids Foundation, including President & CEO Ted Garrard (centre left), as part of the 2013 Giving Back In Our Community campaign.