Ciders from around the world, and local ones produced here in Ontario, are gaining popularity among beer drinkers this summer and fuelling an unprecedented growth trend in the beer and cider category at LCBO.

Cider has been a popular summer beverage in Europe for many years, and while the category remains small by comparison to beer, cider sales in Ontario over the last 10 years have grown steadily.  The recent renaissance in fiscal 2012-13, when sales grew more than 76 per cent in one year, continues. Last year, cider sales peaked at nearly $60.3 million, up more than 50 per cent over the year prior. Growth in Ontario cider sales has outpaced sales of imported cider, and approximately two-thirds of the domestic cider sold at LCBO is produced in Ontario. Traditionally made from apples, more cideries are experimenting with other base fruit like pears and stone fruit, and LCBO customers like what they’re offering.

Beer preferences also change in summer when customers favour styles that are lighter and can be enjoyed over a longer period. Still flavourful, but less bitter than the popular India pale ale, wheat, fruit and radler beers (a beer and fruit juice lager) are increasingly popular choices. Ontario craft beer continues its surge in popularity and this summer there are more than 180 local brews in LCBO stores.

Summer weather patterns heavily influence beer and cider sales. Generally LCBO sees about 45 per cent of these annual sales between May and September. Warm, sunny weather is positive for sales, but of all LCBO products, beer sales are most negatively affected by rainy, cool summers.

Remember to be a responsible host this summer:

• Don’t plan physical activities when you’re serving alcohol. People are more prone to accidents and injury when drinking.
• Provide low-alcohol and alcohol-free drinks for all guests, such as Mocktails, non-alcoholic punch, pop, water, tea and coffee.
• Have food available to avoid drinking on an empty stomach. Avoid serving salty, sweet or greasy snack foods. High-starch and protein foods such as meats, veggies, cheeses, dips and breads are good choices.
• Promote the use of designated drivers and keep cash and phone numbers on hand for taxis. Be prepared for overnight guests.
• Please bring a reusable bag when shopping at the LCBO and take your empty beverage alcohol containers (large and small glass bottles, PET plastic, Tetra Pak cartons, bag-in-box and cans) to The Beer Store for a full deposit refund.

“Cider, especially locally produced Ontario cider, is very popular with millennials and customers who look for something different to try in the summer,” said Leanne Rhee, LCBO Category Manager, Beer & Cider.  “There are also so many new different Ontario craft beers available this summer so there is something to satisfy everyone’s taste and budget.” 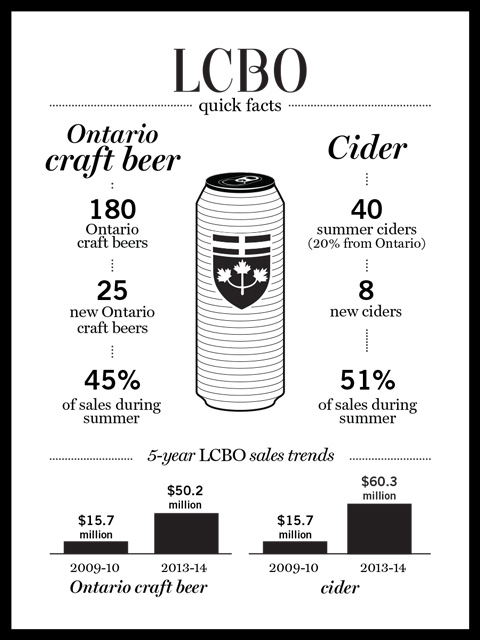